Measurements – Annabelle’s still our little “chocolate chip” baby because she tiny and sweet as can be! She’s hanging out right below 13 pounds. Literally she’s exactly 12 pound and 15 ounces. She needs just one more ounce to make her officially a 13 pounder… which we’re sure will definitely be next month! She’s such a little tiny bean that she still fits into some of her 0-3 month clothes although her little footie pj’s at that size fit her just perfectly in length so we’re pretty sure we’ll be breaking out the 6 month ones next month because length wise she probably wont fit them any more. Even though she is on the smaller side of average Annabelle’s still meeting (and in many cases exceeding) her developmental milestones so we’re not worried because as our doctors office has told us people come in all shapes and sizes, and Annabelle is very healthy and strong; she’s just also petite. The phrase “Though she be but small she is fierce” comes to mind when I think about our little teacup baby girl because though she is definitely petite she is not one to sit still or let her thoughts go unheard. She is already so smart and capable and is definitely going to keep us on our toes as she grows. 🙂

Best Moment – There was so many fun new things that Annabelle learned to do this month but the one that Matt and I both got the most joy out of watching her develop was definitely when she discovered she had a tongue! It was at the very beginning of the month when one morning while we were playing together after breakfast she started giggling up a storm and playfully sticking it out at us. lol We all three got such a kick out of it as Matt and I could both tell she knew how funny she was being and was doing it on purpose to make us laugh. 🙂 So glad we got this on video before she lost interest and moved on to the next new and interesting thing ❤

Happy 27th birthday to my most favorite person in the whole entire world, my very best friend and the most incredible husband and father ever to grace this green earth in my opinion! Matt you are the most loving, devoted, hardworking, genuine person I have ever known! Your love for Jesus, our family and others is truly inspiring! I'm so thankful that God brought you into my life. I'm truly a better version of myself because I know you. Thank you for always being tender and gracious with me, but also for keeping it real! I can't wait to see all the plans God has for you this next year and I feel so honored that I get to be the one to have a front row seat to watch them all unfold!! I love you and I'm so proud to call myself your wife! Also, the fact that the first thing you wanted to do when you got off of work today was give me a kiss and then go get Annabelle and spend a little time cuddling her definitely made me fall even more head over heels in love with you!!! Seriously we are hands down the luckiest, most blessed girls this side of heaven to have you in our lives! I love you and happy 27th Mr. Pomeroy! 😍😘❤️ #birthdayman #27isheaven #happybirthday #howdidigetsolucky #imarriedup #mancrusheveryday #pairofpomeroys

Worst Moment – Annabelle officially started teething at the very beginning of this month. And along with that has come bouts of nursing strikes, a couple sleepless nights because she is so uncomfy and one horrid diaper rash that took days of going diaper free as much as humanly possible to clear up. It’s amazing what a little fresh air can do though! Not only is it good for a little girls soul but apparently her bottom side too lol  We do our best to sooth her in ways that do not require medication but when nothing is working we do end up pulling out the Tylenol on occasion to help ease her discomfort. Thankfully teething is coming and going right now in short spurts. So she’ll teeth one day or a few days in a row and then won’t teeth for the rest of the week and into the next week. I guess when it’s all said and done it’s not that bad, but in the moment a momma and daddy and feel pretty helpless because in all reality you are. The only thing you can really do is do your best to make that little one comfortable and to bare with them through it.

Favorite Things – Annabelle’s newest favorite thing by far this month would be playing with her feet. On the rare occasion that Annabelle is laying on her back these days it’s so she can grab hold of her little feet and look at her little toesies. Sometimes she’ll even sway back and forth in the happy baby pose, just like her mommy used to do when she was Annabelle’s age. Who knew Annabelle would be such a little yogi just like her momma lol

She also has become quite fond of  hanging out in her exersaucer! She loves bouncing up and down while playing with all the cool little gadgets that are strung across it’s boarders. And her eyes light up and get wide with excitement and wonder each time she finds something new to explore there. Then she turns to Matt and I or whoever is visiting her, like Aunt Kiki, Mimi or Grandma and exclaims with excitement what she’s discovered! 🙂 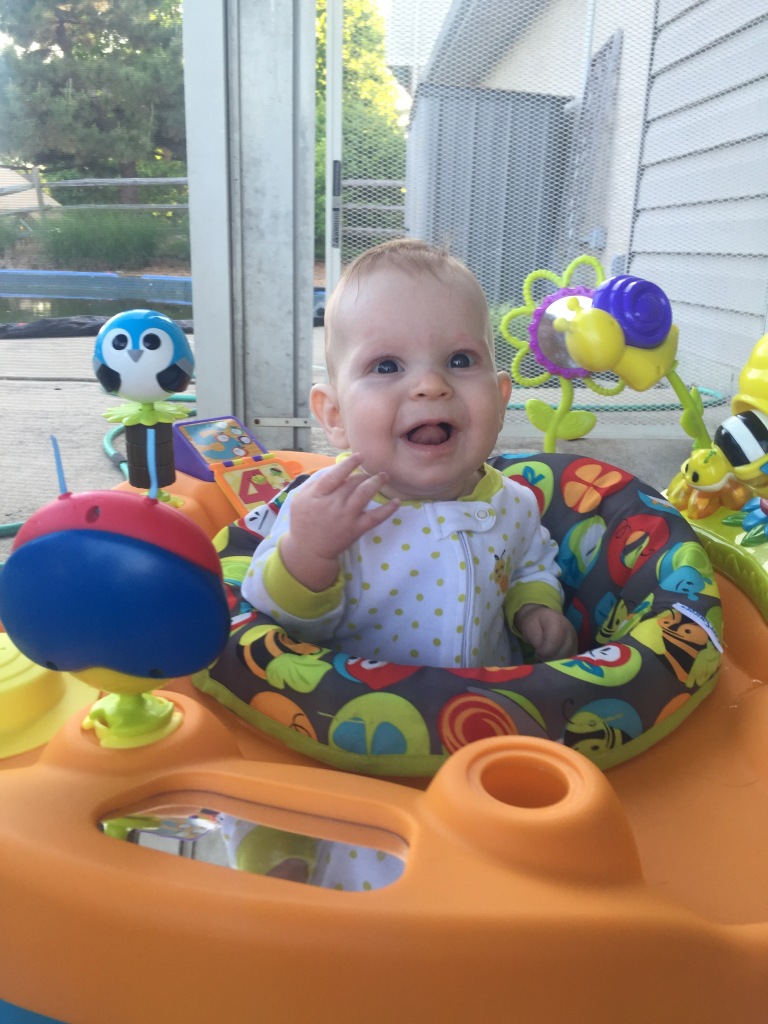 Highlights – Annabelle had a full 5th month of life. She not only prefers to be on her stomach during her wake times but also while she is sleeping. And if she is going somewhere her main motive of self transportation is to roll herself over and over again until she gets to where she was wanting to go…. and once she’s there Annabelle has become mighty good at reaching out and grabbing whatever it is that she was after and bringing it to her mouth.. because that is where everything goes these days. lol

She also loves taking car rides now and not just because it’s a good place to fall asleep but because she can look out the window and see a world that is all new to her. Matt and I love looking back at her through the rear view mirror to catch a glimpse of her new discoveries in her car seat mirror while we’re on the road. She’s also quite the extrovert and does not want to nap in mommy or daddy’s arms(.. or her crib or pack n’ play for that matter) anymore if there are people around and fun stuff going on! She likes to be in the middle of it all, enjoying everyones company. 🙂

She also celebrated her Daddy’s 27th Birthday and watched her very first Kentucky Derby this month, which was kinda nostalgic for us because at Matt’s Birthday dinner last year is when we announced to our family (and officially started telling people) we were pregnant with her this time last year.

\She went to a couple cookouts with her friends (and their parents.. including her own lol) and even had a fun Daddy, daughter night out with a bunch of her fellow gal pals and their daddy’s while her mommy and her friends mommys went to see a movie and have a much needed girls night out together.

She helped her Aunt Kiki get ready for her Junior Prom as well as help her Great Gram move into her new condo just down the street from our home! We are really looking forward to all the family dinner nights that we will hopefully be starting up this summer once everyone gets settled. 🙂

She watched as her home bloomed with life around her during her first springtime season and got to meet a few fellow families that decided to make 11 Barnwood their home as well, namely the Robins nest in the corner of our guest bedroom that had four baby chicks and the Rabbits borough near our pool that has baby bunnies in it currently. And last but not least she celebrated her first mothers day on the outside of this world with her daddy and I!